Lord Gizmonik Doomslayer is a yet-unseen mad scientist working for the Alliance.
He has sworn to bring EZ Rider down by trolling his MST3K Tribute and by turning
HAL, EZ’s AI (who runs the show and house) against him with dark particles.

HAL almost killed EZ, who was able to confuse its programming
(with Ohranger aerobics) and caused it to shut down permanently.
What even plans does LGD have in store for EZ Rider next?

From his farmland fortress, EZ Rider and his two imagin Rage ‘Rager’ Rider and Suave Rider tackle the best and worse that Tokusatsu has to offer. The imagin imbue EZ’s collection of toku items with the power to fight against the villains that threaten his and by extension their continued existence.

Here you will find an archive of all of EZ’s Toku Time episodes, along with videos from his other shows such as What the Faiz of the Week. You’ll also find Rager’s PPV (That’s PAIN-Per-View!) Lockdown, Rager’s look into the ring of WWE Pay Per View’s

Enjoy your time here at the site, and please let us know if there’s any questions or suggestions for the site! 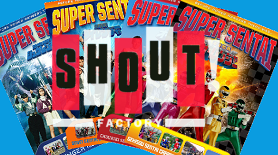